In the Room(s) Where It Happens

Or more so, because our performance series does not recast the past but looks forward 50 years into the future…

Last weekend I spent most of Saturday and Sunday gathered with the cast and crew of Transmission in various locations in Toronto. One of them being a stage at CineSpace Studios–just a big long hallway away from where they filmed Handmaiden’s Tale. 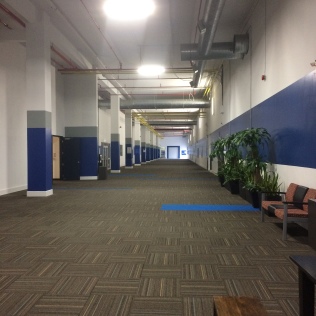 No, I didn’t get to watch much of the green screen/motion capture filming. But I did contribute as a writer and dramaturg as we recorded audio and video scripts that I had written.

After years of developing the structure, months of creating the characters, and weeks of writing and re-writing the scripts, I got to help our cast and crew bring them to life.

It was electrifying to finally meet the actors, director, producers, and designers. We’re going to make the thing!

The first batch of recording happened without me. Sadly, the day job didn’t allow me to pick up in the middle of April and go to Edinburgh for the International Science Festival and a week of filming on site.

Writing for Transmission has been a new creation experience for me, one that I need to learn to keep working in theater and film. Due to the international cast, international crew, international producing and span of the entire project, collaboration is key. Working in the moment, responding to feedback and making changes on the spot–after months of planning ahead–is what it’s all about.

It’s also different to be asked by actors what I meant when I wrote a script. My first two college productions kept me strictly out of the rehearsal space. My Indie 6ix staged reading at Storefront was still a workshop, so Q&A with the cast operated in a different way.

But in this case, the actors ask and they CARE. And it’s essential for this production that we incorporate their perspectives.

It’s important that main characters Leila and Zada Karam are the daughters of refugees from Syria. Fifty years in the future, we’re imagined two leaders in the interstellar mission to meet humanity’s celestial neighbors on Proxima Centauri B as the children of Syrian refugees who are entering Canada right now.

Imagining all this to write a first draft was one thing. We had to make some guesses to get the bones of the scenes and conflicts on the page. But now that we have actors on board who have experience with immigration, persecution, leaving home behind due to war and conflict–those guesses needed to be corrected.

The experts interviewed in the podcast corrected the science at the root of our fiction.
The actors are our experts in fleshing out each character as a living, breathing human.

We’ve got over half of the scenes recorded, the ticketing page is LIVE—so please go and buy your tickets for the Mission Briefing in August now–and the rehearsal schedule is up for the rest of the summer.

For a deeper look behind the scenes, stay tuned to the podcast as June will bring interviews with the cast and writing team.

1 Response to In the Room(s) Where It Happens